I often build guitars that don’t have a traditional centre sound hole and I invariably get asked how that affects the guitars tone. My answer has always been a bit hand-wavy and technical but I’ve long thought it’d be cool to have two similar guitars, one with a centre sound hole and one without. Perhaps then I’d be able to give a more practical answer based on a real world example.That idea percolated for some time.

A potential customer inquired about having a 12 fret, OM sized guitar built. In flushing out the requirements for the build, the question of sound hole location came up. The customer was undecided. That’s when a light bulb went on and it occurred to me that this could be the opportunity I’d been looking for. And so the idea for “the butternut twins” was born.

The goal for these guitars was to create a pair of very lightweight and responsive guitars. Intended primarily for finger style playing, they’d use what’s referred to as a ‘live’ back, a design paradigm where the guitar is built lightly so that the back vibrates in sympathy with the top. Done right, you can feel the guitar vibrating when it’s played.

Those goals factored in to everything from the design, through material selection (butternut being one of the lightest weight hardwoods available), and construction. The twins were purposely built to be similar. Wood for the backs, sides, and necks was resawed from the same boards. Spruce tops were provided by the same supplier. The obvious difference would be the number and placement of sound holes. Less obvious would the bracing used on the tops. The single sound hole model would use a more traditional X bracing layout while the multi sound hole guitar would make use of an offset, asymmetrical X bracing layout.

The guitars themselves would be 12 fretters with a body size and shape similar to a Martin OM. This combination pushes the bridge farther down towards the widest part of the lower bout (the sweet spot) and helps promote responsiveness and projection. Both guitars would sport a cutaway providing improved access to the upper frets, and both would feature a side sound port on the upper bout to help direct sound towards the player.

In the end, I believe the established goals were achieved. The finished guitars weigh in at 1.55 kg / 3.4 lb (single hole) and 1.64 kg / 3.6 lb (multi hole). For comparison, a Martin 000-18 apparently weighs about 1.98 kg / 4.4 lb. The Engelmann spruce tops provide just the right attack and responsiveness for finger style use but with sufficient headroom to also easily accommodate light strumming. And yes, when you play sitting down, you actually can feel the guitar vibrate in response to your input. 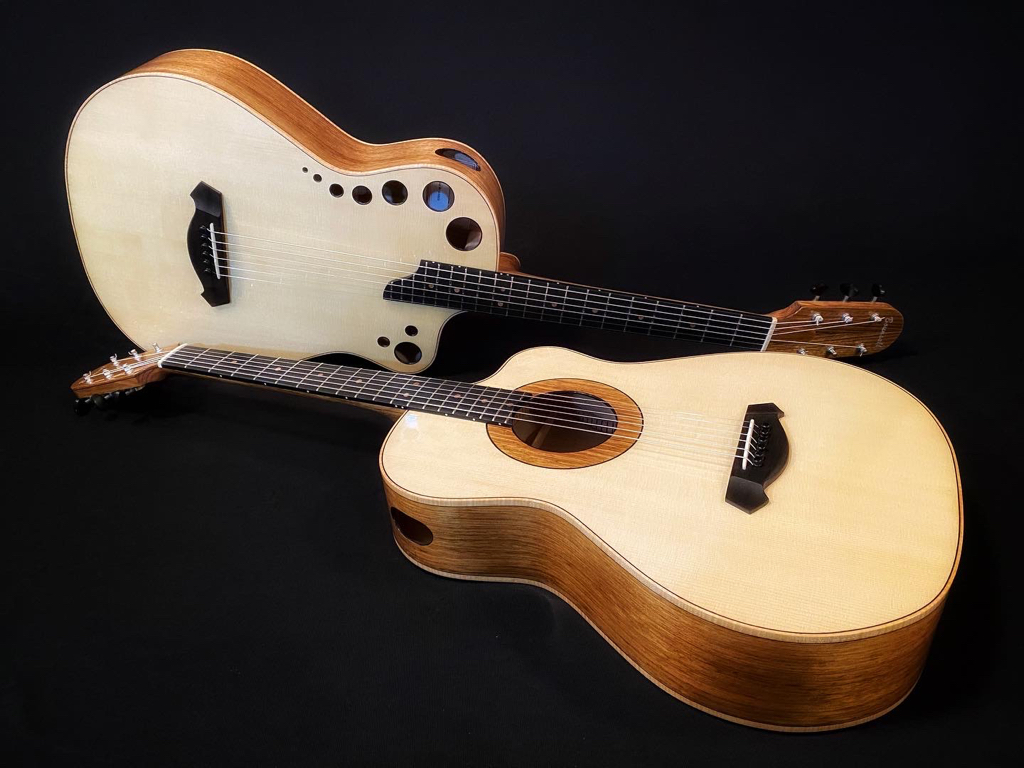 So how do they sound? My initial impression was that they sound quite similar. There are differences. Some obvious. Some more subtle. Have a listen to this short video with back-to-back sound samples and derive your own conclusions.